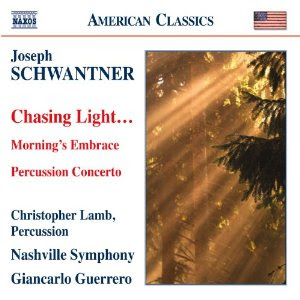 Joseph Schwantner has gone from the status of a very promising young modernist American composer in the late '60s to one of our very best today. The new Nashville Symphony recording of three of Maestro Schwantner's major later period works, Chasing Light (Naxos 8.559678), makes it clear why. He has developed a vividly colorful orchestral palette which he uses to cover musical canvases in ways that strike the ear and remain memorable long after they have been heard.

The CD gives listeners a generous 68 minutes of his music. The 1994 "Concerto for Percussion and Orchestra" brings together some very difficult and exciting percussion soloing (performed here by Christopher Lamb, for whom the work was originally intended) with orchestral brilliance. The National Symphony Orchestra under Leonard Slatkin (with Evelyn Glennie as soloist) did a version for RCA in the later '90s. That version was excellent, but Giancarlo Guerrero and the Nashville Symphony hold their own on the Naxos disk with a reading that is every bit as luminous, though I might give a slight edge to Glennie for her impassioned performance.

"Morning's Embrace," the second work on the program, is a 2005 work with some prominent percussion and even more brilliant orchestral light. It depicts a sunrise in rural New Hampshire and it does so with all the resources the orchestra can muster.

The final work (from 2008) shows that Schwantner does not stand still. His orchestral writing is confident, lucid and original. You can hear the development in his musical vocabulary in the 14 years represented on the disk, culminating in a rather thrilling dynamism and muscular energy that eschews trendiness and opts instead for a form of personal expression that cuts across catagorical niceties to go straight into a realm one can best call Schwantner music.

He is a gem, a blazing sun of orchestral music today. Chasing Light gives you three exemplary works, played with conviction. It should not be ignored.
Posted by Grego Applegate Edwards at 4:52 AM