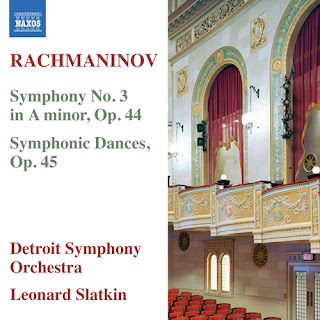 An old boss of mine, who was good to me, was surprised when I told her that Rachmaninov lived in the 20th century and died in the '40s. She thought he belonged to the century preceding the 20th. It is not surprising, especially if you are familiar with some of the piano pieces and his concertos. Essentially he did belong to the late 19th century in spirit. Unlike his compatriots Stravinsky and Prokofiev, he was never really involved with the modern fashions so much a part of his era. He was very much into a Russian sound, regardless, and in the end his music was so much his that none of it really mattered.

This is as true of his Symphony No. 3, op. 44 and the Symphonic Dances, op. 45 (Naxos 8.573051) as of any of his works. And the Third Symphony is essential to his output. Grand Doyen Leonard Slatkin conducts the Detroit Symphony Orchestra in recent performances of the above works in a nicely produced budget version on Naxos.

The orchestra under Slatkin gives very detailed renditions of the works, with strongly defined and balanced wind/brass parts and a slightly less predominant string section than can sometimes be the case, especially in some classic Russian renditions that I am used to hearing.

This took me a few listens to get acclimated to, and now I must say I find the disk quite worthwhile, not less impassioned than the versions I have heard on timeless occasions, and in a way more sympathetic to the entire gestalt of these works.

The symphony has strongly cohesive and memorable thematic development, and surely belongs as one of his very greatest endeavors, though his Second sometimes has gotten more general coverage because of in part an attractive theme that entered popular music last century. The first symphony has a most youthful dash and slightly frenetic demeanor which has over the years given me much pleasure. But it is the Third that in the end takes the brass ring.

The Symphonic Dances contain a great deal of fantastic music as well, especially in the folksy-brilliant Slavic drive of the first movement. Slatkin handles it all well and the orchestra does not flag, though this may not be the definitive version. Again however, you get an excellent balance of the overall orchestra in the soundstage.

If you are on a budget (and who isn't these days?) you are royally served by this Naxos release. And for those who already have a number of versions of these works, Slatkin/Detroit give you another take, well-worth your time and effort.