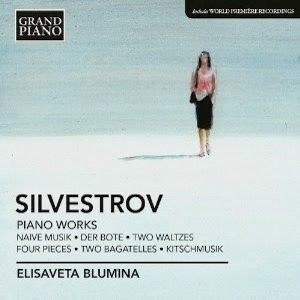 Solo piano music in the classical realm has its own trajectory, compared with orchestral or vocal music. The shading and color of the music can be distinct of course, but the nature of the pianoforte lends itself to intimacy, to the nature of the notes and harmonic content in a more unified, direct way, and of course then how it all is shaded by the composer and in turn the performer. The result of this is that a composer may show a very distinct side of him or herself in solo piano works.

In the case of Ukrainian composer Valentin Silvestrov this seems very much so, as heard in Elisaveta Blumina's very lovely rendition of select Piano Works (Grand Piano 639).

The disk covers a long period of the composers' ouevre, from 1954-55 (rev. 1993) through to 2011. In contrast to the works for larger forces (some of which I have covered on these pages in the recent past), he seems to glance backward more continuously and to some peak periods in the stylistic canon of solo piano music.

So we get some beautiful music that touches strongly upon classical Mozartian, romantic Schumannian, Brahmsian and Chopanesque, and Debussian, Ravellian and Satiean moments, all as recalled in a dream, or in other words as refracted by the musical equivalent of light, water, air, and memory. It's a beautiful lyric set of works, given a supremely sympathetic performance that enters deeply into the world of the music.

It's piano music that could have been written 100 years ago or even more, that would not seem out of place in such a period. It in a way involves a refusal of the world of modernity, a very gentle one. And one most certainly gets the feeling that the music is what Silvestrov felt as he sat down to the piano, that it flowed out of him naturally, unforced. I say that because the musical language sounds so "native" to the composer.

Performance, music and production are of the highest levels. The music is so pleasingly engaging that it will appeal to just about everyone if they give it a chance. Music that dreams of other eras may have to emerge from that dream someday, but perhaps not, perhaps it will go on with the dream forever. Either way, Silvestrov shows himself possessed with the spirit of the time before ours in this music. We follow the path and revel in the sounds, knowing all too well we must return to the present. The music, perhaps, will ever stay in its limbo world, where we can return to it at will.

A most unusual disk and quite beautiful!