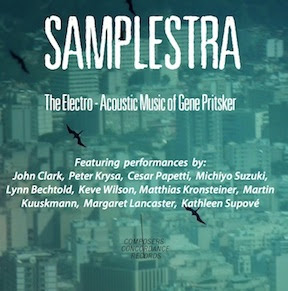 Sampling has been a huge part of the music worlds of hip-hop, some pop, some rock and a little electronic jazz since the technology became widespread in the '80s. Of course, as an analog or later as a digitally realized sound source it has been part of the classical avant of electro-acoustic music since the first tape recorder pieces in the very late '40s and early '50s.

With all that there have been only a handful of composers who have managed to make a consistently sustained, coherent dialog out of the sampling of world, hip-hop, rock, jazz and classical elements who combined that with live instrumentalists.

One of those most certainly is Gene Pritsker, especially in the very latest release of his, Samplestra: The Electro-Acoustic Music of Gene Pritsker (Composers Concordance 0011) coming out this month (towards the end of it).

On it we have 14 relatively short works, each devoted to a series of samples that form a kind of orchestra. For each work a soloist (or in one case a trio of soloists) performs live over the samples with parts that are either mostly or wholly written out, with several that feature some improvisation as an important element of the mix. So we have pieces featuring John Clark's horn, Peter Krysa's violin, Martin Kuuskmaan's bassoon, and Gene himself on electric guitar, among others. All do a fine job.

What makes it extremely interesting is the abundance of good compositional ideas and their realizations. As alluded to, there are some sample segments that feature rock and hip-hop beats, plus classically oriented, world derived, rock- and jazz-oriented melodic-harmonic sounds. The dialog between live soloist(s) and samplestra is virtually uniformly cohesive. It's music that has the tang of the modern, the spatial wooziness of soundscape electronics at times, but then a neo-baroque interaction at times as well, not so much conventional counterpoint as a contrapuntal give and take between the elements.

As music, which ultimately we of course evaluate anything new on the basis of, it hangs together remarkably well. Don't try to pin it down stylistically but let it take you where it may. If you do that you will find an enormously stimulating program. This is the sort of thing Gene has been working on for some time, and he has gotten extraordinarily adept at juggling the elements and making it all very cohesive and very musical. Brilliant!