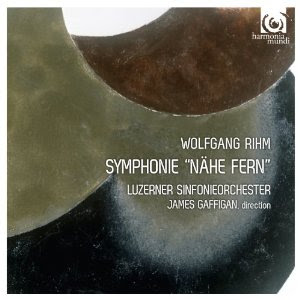 Wolfgang Rihm has become a living composer of high worth, to my mind, an extraordinarily creative musical voice, a man who engages tradition but never is subsumed by it, an original, a modernist for all times.

So it is only natural that his Symphony "Nähe Fern" (Harmonia Mundi HMC 902153), enjoying its world première recording this week by the Luzerner Sinfonieorchester under James Gaffigen, draws upon a Goethe poem and the four Brahms symphonies for its inspiration and source wellspring.

"Nähe Fern" translates literally into "Near Far," and alludes to a line from Goethe that in English might read "Twilight has fallen from above, / Already all nearness is distant."

The symphony falls into four movements, each a kind of preface to a Brahms symphony. Interjected after the first movement is the Rihm-Goethe song that is based on the poem alluded to, "Dämmrung senkte sich von oben," originally for voice and piano but reworked by Rihm for the symphony orchestra and baritone Hans Christoph Begemann. It stylistically blends with the symphony completely, so that the sequence seems natural and desirable.

Interjected into the musical flow within the symphony are allusions, musical quotations and paraphrases from the four Brahms works. Some passages are quite recognizable, yet brilliantly transformed, others lay seemingly cloaked under Rihms' own inventions and transformations.

Backgrounding now accomplished, we can turn to the music itself: it is richly symphonic, a modernist analog of sorts to Brahms' expressively thick romanticism, near in that way but "become distant" with the twilight domain of Rihm's own presence and personal sensibilities shining forth in the world of the 2010's.

It is then idiomatically Rihm's, the tonality and texture expanded because that is what the composer hears. There is a wealth of thematic material handled with Rihm's unique symphonic gift, rather gravitas, deep, moving yet partially concealed, as it were. It is profoundly and characteristically a music for today. In that way it is a brilliantly dark work, rather brilliantly realized by Gaffigen's sure hand and the concentrated weight of the Luzerner Sinfonieorchester.

Rihm epitomizes here the age we are in, our technology outrun our humanity, for a lived experience and music no longer the product of an abstracted, smoothly realized innovated modernity, but subject to submergence, to a new expressivity, a twilight of ages past awaiting another dawn. In that wise we remain mindful of the heritage we share but find archaeological depth intervening between the past and the now. Perhaps.

The recording should further distinguish Rihm, surely, as one of the master-composers of this still quite young century. It feels like a work that will have staying power. Brilliant and highly recommended!