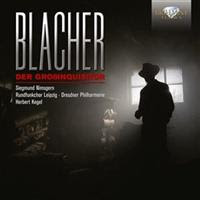 The figure of Boris Blacher (1903-1975) stands somewhat alone among German composers of the 20th century. Not a part of either the later romantic or earlier modernist camps, neither did he precurse the serial Darmstadt composers in any straightforward way. Yet his music is thoroughly of his era in its bold use of rhythm, shifting time signatures, melodic asymmetry. By the time of the Second World War his music was forbidden under Hitler. He was on the national register of Jews in Germany and his career seemed to be over. His life was in danger. Nevertheless he tried to continue composing.

After much internal struggle he managed to complete Der Grossinquisitor (Brilliant 9437), a hauntingly somber oratorio based on Dostoyevsky's Grand Inquisitor sequence from the Brothers Karamazov. The definitive Herbert Kegel performance from 1986, recorded with the Rundfunkchor Leipzig and the Dresdner Philharmonie, Siegmund Nimsgern in the solo baritone role, is newly available in the States. I have been listening.

As one might expect, this is not a music of joy. It is deeply dark like Dostoyevsky's subject, melodically fluid, grave and utterly original. The recorded performance is excellent, Sigmund Nimsgern outstanding, the Rundfunkchor and Dresdner Philharmonie under Kegel impassioned and beautifully moody.

It is a masterpiece of the war period, not quite like anything Blacher did in later years, and utterly moving. As far as I know this is the only available version. It is a must for anyone with an interest in historical-modern European composition.