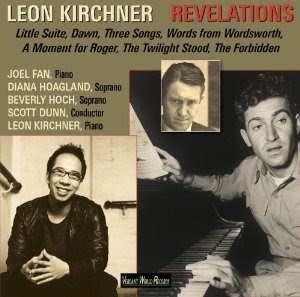 Leon Kirchner passed away in 2009. He spent a lifetime composing works in his own style, modernist, chromatic-rubato-expressive yet abstracted in rhythmic time. Many like myself probably still have a copy of his Third String Quartet on an old Columbia LP, if you go back that far in your listening-accumulating. The work won him the Pulitzer Prize and it is very worth hearing. But perhaps like with me his other work is not as well-known to you. For that we have the remedy of an anthology of some choice chamber and vocal works on the CD Revelations (Verdant World 002).

It has a nicely chosen cross-section of solo piano works, songs, and choral works spanning the years 1943-2006. There is quite understandably development and stylistic enrichment to be heard in Kirchner's music over time. Nonetheless the charm and expressively miniature qualities of the 1949 "Little Suite" for piano has as much to offer your ears as the later 2006 "The Forbidden," again for piano. Time and tide had altered his musical vision somewhat, but there was something strong there from the beginning. The choral works haunt, the songs are difficult to sing, challenging, with post-Schoenbergian leaps and great demands placed on the artistry of the soprano.

In the end we have a judicious survey of some choice small works that piques the interest, heightens appreciation of Kirchner the man and the composer, and satisfies the modern-seeking musical consciousness. Performances are very good, as is sound quality. Recommended!