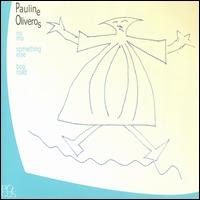 The '60s in the US were a time when modernism, the production of electronic music and the releases of LPs devoted to same were at a height. It seemed like every major university and conservatory had resident modern-music composers, a fair number composed electronically as well as instrumentally, and there were a scattering of electronic music centers affiliated with schools across the country, the Columbia-Princeton Center being the most widely known.

In addition to the new and/or by then well established Europeans, labels were producing music by Ives and the earlier generation of composers, serialists, Cage and those that followed in his wake, all readily available for the most part, many at budget prices. It was toward the end of that period that I became familiar with Pauline Oliveros and her electronic & electro-acoustic music via an electronic music anthology on Odyssey and a side of a ten-inch record issued as part of the short-lived but highly regarded Source book/record periodical. I found the music interesting but failed to get a clear picture of what she was doing, partially because there was so much to absorb back then.

Of course she has become much better known since that period, for her electro-acoustics and instrumental works, some of which feature her unique avant-accordion playing. Her early period I never explored further for various reasons, mostly because I did not find any other releases to study. Until now.

No Mo (Pogus P21023-2) brings that period back into focus with three substantial electronic compositions from the '60s. The title work, "No Mo," and its companion "Something Else" were created at the Classical Electronic Music Studio at the University of Toronto where she worked in 1966. The third work, "Bog Road" is a longer sound poem created in 1967 when she was Director of the Mills Tape Music Center at Mills College.

All three works were a product of two summers of composition-assemblage. As I've been auditioning the CD in the past week of the current, very hot and humid summer here in New Jersey I've come to know and appreciate the music, and in the process felt some of the summer in these works. All three have atmospheric, dramatically electro-natural-sounding resonances of for the most part processually expansive non-periodistic noise elements, with the presence at times of pitch structures (especially in "Bog Road"), but not in the typical musical sequential sense. And they feel like summer to me. Summer in a natural landscape or summer in an infernal industrial world, but summer either way.

"Bog Road" has much to do with the studio's location overlooking a pond, where frogs would sound their collective song. The Buchla box Oliveros utilized in composing the music gave her an arsenal of sounds from which to choose. As she states in the liners, the frogs and their ambient symphony inspired her to create an analog of their music in her own way. It's a beautifully evocative piece.

"No Mo" and "Something Else" have a very different sound to them due in part to the means available: tone generators, noise sources, tape delay. These are much more dynamically extroverted, especially "No Mo," noisy but endlessly inventive. "Something Else" spans the sounds out into more horizontal narrative structures. The sound is less commanding, more expanding.

In the end hearing these three works repeatedly opens up a new universe of understanding of the early music of Ms. Oliveros. They provide major electronic music poetics, perhaps at times a great deal more anarchic and sometimes more noisy than what some of her contemporaries were doing, but also (especially in "Bog Road") more ambient, more tuned to the representation-abstraction possibilities available from the generative electronics at hand and less to the external referents of the modern music then very much in the air. Maybe because of that these works have more currency to my ears than some other works of the era. Oliveros the electronic composer was not tied to the prevailing musico-electronic language of the times. She went her own way.

This may not be music for everybody. It's very avant, sometimes a bit abrasive, never condescending. But for those students of Oliveros and the avant garde, those seeking to understand the development of electronic music and what was happening in the second decade of its life, this one is highly illuminating and enjoyable.