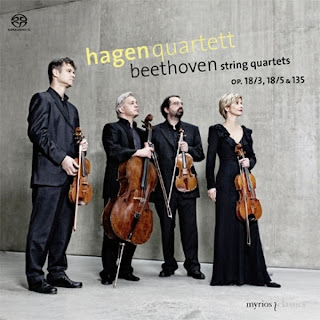 "He's discovering the Beethoven late quartets for the first time. I envy him," said Morris L. (NY Phil) to his graduate student as they were winding up a lesson in which they were going over the percussion part for "L'Histoire du Soldat." I smiled. "So the late quartets are that special?", I thought to myself. I knew them, not all that well. Chamber music was not something I had studied all that much or had been introduced to the official narratives about much, at that point. I was 19. I went back and listened more intently. These many years later, I still am. Listening intently, that is.

So much for a slice of my own history. Fact is Beethoven's string quartets are not-to-miss. The late ones reach a height few ever attained in that context. But the early-middle-period ones have an eloquence and constructive-expressive excellence that too need to be lived inside over a long period of time to appreciate completely.

Bring on the Hagen Quartet, a marvelous outfit that celebrated its 30th year in 2011 and toured the world as they performed the complete Beethoven quartets in 2012-13. They have been justly acclaimed throughout their career and now we have a new CD of their versions of Beethoven String Quartets op 18/3, 18/5 and 135 (Myrios Classics 009).

At this point I am tempted to make a noise of satisfaction, a "mmmmm" and leave it at that. But that is not why I am (not) paid to write this little column more or less five days a week. It's certainly not why you are reading it. I've lived with the famed Budapest Quartet's versions of these for many years. As excellent as that outfit was, they did tend to overplay the emotive side of Beethoven (and others) in a way that while admirable, doesn't always speak to us in this now long modern world.

The Hagen Quartet has an impressive discipline, a wonderful ability to bring out the nuances of each passage, to maximize the potential of subtlety and dynamics at a micro level and not just as a sort of gypsy full-out gush. There is plenty of passion there, but there also is the savoring of every phrase. These are wholly marvelous performances, some of the very best you can hear of these works to my ears. They are fully inside the Beethovian quartet mind, as if they were present at each creation. The music comes alive fully, with orative power, like Laurence Olivier doing Shakespeare. Every particle is given due consideration for a whole that is ravishing. Ravishing.

Now I wish I had them doing the other quartets in the cycle. In the meantime I hope you can hear this disk. It is everything you could wish for. For today. And tomorrow.