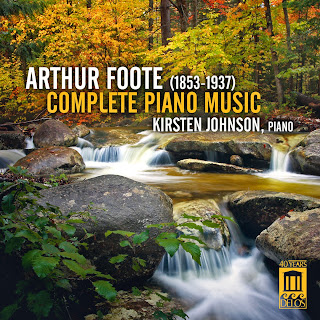 If Arthur Foote (1853-1937) is not known today as the "father of American classical music" it wasn't always the case. He was well regarded during his lifetime, surely a contender for the honorific of founder-figure. By the time of his death the modernists had become a force unto themselves. His music seemed old-fashioned. And eventually Charles Ives' music came to be recognized as both original and foundational. Foote's light had ceased to burn as brightly.

Indeed Foote today is not looked upon as a brilliant innovator. He took romanticism and a bit of impressionism and made a very well crafted version of his own. He is not the place to look for the American root source of the music that followed. Yet he bears a hearing. At his best he is a lyrical force that can do much to bring pleasure to your listening.

These thoughts have been on my mind as I have listened closely to Kirsten Johnson's three-CD set of his Complete Piano Music (Delos DE 3442). The pieces comprise well over three hours worth of music, from the beginnings of his career to the end. It is a major undertaking. Kirsten Johnson renders the works with sympathy and poetic attentiveness.

And as the program unfolded, I found myself responding increasingly to the music. The first works are firmly within a romantic Beethoven-Schumann-Chopinesque tradition. And there are works that sound like pedagogic etudes, studies in arpeggiation and such. But as he progresses there is more and more originality and an expanded sensibility that encompasses some of the impressionist openness.

The minor key pieces always seem right, but towards mid-point in his career on, much of the work has an inventive thematic songfulness to it. The breadth of the set coupled with Johnson's sincere artistry means that it is for now a kind of last word on Foote the composer of piano works. It provides much to like and a full picture of Foote the artist. In the end you stop caring whether his music was as advanced as some of his contemporaries and you fall under its spell happily.

Listen and you'll be taken on a most pleasant journey. This set won't upset the applecart of American musical history, but it no doubt will give you much pleasure if you accept it on its own terms.