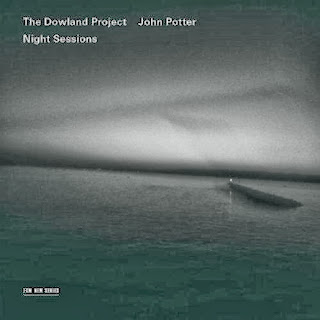 There are genre bending, category conflating, creative hybridizations out there to be heard these days. Some do what they do very well. Others don't quite manage to make it all hang together. John Potter and The Dowland Project is most definitely the former kind of gathering. They combine Dowland era vocals and lute music with adventurous free improvisation, old English poetic recitation and a very keen sense of stretching that works fully.

Their recent album Night Sessions (ECM B00 18701-02) came about as a result of an extemporaneous nighttime recording session after the group had completed what eventually became the album Care-charming Sleep. The unplanned nature of Night Sessions gives the music a special spontaneity.

Who are The Dowland Project? The center of it all rests with John Potter, talented vocalist. He was a long-time member of the famed Hilliard Ensemble and brings a great deal of early music expertise and artistry to the ensemble. Then there is Stephen Stubbs, a lutenist of skill and finesse, player of the baroque guitar, chitarrone and vihuela. Further and critical are the presence of two major figures in open-form jazz today, John Surman on soprano saxaphone and bass clarinet, and Barry Guy on double bass. Rounding out the group is the important inclusion of a two-person violin section of Maya Homburger and Milos Valent (the latter also on viola), creative improvisors and bringers of early and rustic stylistic echoes from a time long gone.

What is uncanny is the range of combinations the group achieves here. From straightforward lute music and lute-vocals characteristic of Dowland's era to such sounds with freely tonal improvisations woven around it, improvised or loosely articulated estampies and the like, and then there are completely idiomatic modern free improvisational expanses, sometimes with John Potter dynamically reciting texts of the earlier period, sometimes fully instrumental. Somewhere in between are very free early style vocalizations with very open improvisational interactions.

Barry Guy is inspired. John Surman, too. The whole band was lucid that night. John Potter holds it all together. Successful interpenetrations of this sort do not happen often. This session comes through with unique character, a kind of stylistic homogenization that no doubt comes out of musical sympathy and a mutual, intuitive understanding of where and when to push back boundaries and how far to do so.

A marvel, this one is. Those that know and love early music will find a way into modern improvisational approaches; those in the latter camp will find the combination with the venerable quite bracing. It's the sort of musical event that's very suitable for anyone who wants a different listening experience. Such people will find much to stimulate and to open up new mental-aural musical panoramas. Bravo!

Posted by Grego Applegate Edwards at 7:24 AM