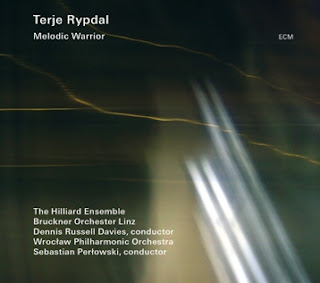 Terje Rypdal has been an innovator in every sense from the very beginning of his now long career. An unparalleled electric guitarist, he created his own sound and style, which uncannily incorporated hard rock and psychedelic-avant elements into a very electric setting that had both jazz elements and the sensibility, projection and beautiful tone that is the amped equivalent of a great classical violinist. In his recordings the music could go from an advanced metal trio, to lush post-progressive rock, to free and avant jazz expansions.

At the same time he began to write new music/classical compositions that utilized his guitar sound and melodic acuity as the principal solo instrument, in blends that sounded marvelously new, and so they were.

His latest album is an ambitious work for his guitar, the Hilliard Ensemble of vocalists (who bring an early music flavor to the work) plus the Bruckner Orchestra Linz under Dennis Russell Davies or the Wroclaw Philharmonia Orchestra under Sebastian Perloswski. Melodic Warrior (ECM CD B0018730-02) is the resulting album. It is his most impressive work thus far in this zone, in every way spectacular.

In reality there are two works represented on the program, but they mesh so well together that they come across as one. There is the title work and there is "And the Sky was Coloured with Waterfalls and Angels," both exceedingly beautiful.

Early-style sounds, late-romantic-expressionist-modernism and Rypdal concerto-like guitar lines join together in a pomo kind of narrative where nothing seems out of place. It is a tour-de-force, and will convince anyone who doesn't already know that Maestro Rypdal is as important a composer as he is a guitarist. It satisfies fully and justifies every minute of its existence as a kind of glorious success. For someone who has appreciated the man from the very first album way back, it makes me very happy to hear. Do not miss this!