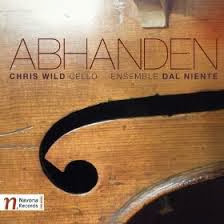 There are recordings that affirm. One of them is Abhanden (Navona 5940), a compendium of six contemporary modern compositions played by Chris Wild on the cello with the Ensemble Dal Niente. It affirms a number of things. One is the centrality of the virtuoso solo cello in contemporary works; the other is the continued viability of more-or-less high modernism today.

Each work has its own character. The constant is Chris Wild as a cellist committed to new music with the talent to pull together sound-oriented passages with surety, and a singing, expressive way as needed.

As one expects on Navona releases, the composers are mostly new names not known to the majority of modern-leaning listeners out there. Yet the music convinces on many levels, each depending on the piece at hand.

My favorite probably is the opening "Spiral" by Chinary Ung, who hails from Cambodia. On this one Chris is joined by piano and percussion for music that has a distinct Southeast Asian tonality but spatially-rhythmically takes more of a modern, fanfare-ish approach that I find extraordinarily effective.

Daniel Dehaan's "If it Encounters the Animal, it Becomes Animalized" and Marcos Balter's "Memoria" are both for unaccompanied cello. The former makes use of extended contemporary sound generation in a sort of ping-pong-for-one jagged abstraction; the latter relies more on sustained rapidly bowed harmonics and multiple stops for a more kinetically mobile sound sculpture.

Andrew Greenwald's "Jeku (II)" brings the cello together with the violin (J. Austin Wulliman) for a slowly pointillistic exchange of exotic sound techniques that are at times strident but always adventurist, too, so that you cannot predict what will happen when and the subsequent sound-event moments are filled with continual, pleasing surprises.

The concluding "Ich Bin Der Welt Abhanden Gekommen" by Eliza Brown brings in soprano Amanda DeBoer Bartlett for a lyrical but expressively strident mood. Bartlett sings quite evocatively as more or less the straight melodist while Chris's cello sounds unusually articulated multiple stops that provide a fascinating harmonic backdrop in contrast with the punctuated spice of dissonance he is called upon to articulate periodically.

It is very moving and, as it and the rest of the album confirms, shows the pervasive excellence of Chris Wild and ensemble members along with a nicely contrasting set of well-conceived compositions.

This one is a winner! Calling all modernists.