Michael Byron, Awakening at the Inn of the Birds 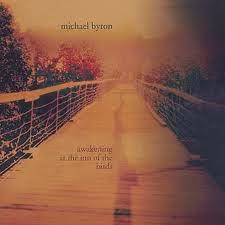 In the rather undifferentiated, blooming and buzzing confusion of the internet taken as a whole these days, getting attention is by no means as easy as it once seemed. The composer Michael Byron is a good example. He is not exceptionally well-known out there and I hope my review will help more people to discover his music, because it deserves the public ear.

My own private ears have been wrapped around his CD Awakening at the Inn of the Birds (Cold Blue 0012). It is a study in contrasts. Chamber music with more than one mood, five compositions are in the program, combining one or two pianos, synthesizer, a string quartet (the FLUX Quartet) and double bass. Not every instrument is used on every piece. And every work has a distinct identity.

"Evaporated Pleasure" (2001) is for two pianos and has a sort of diatonic turbulence of jagged-edged bursts of sound entering abruptly in short sequences which when combined with complementing bursts create a kind of whirlwind effect.

The title cut "Awakening at the Inn of the Birds" (2001) has a similar objective, only it is for the strings. You realize that it has the sort of total cacophony that a full contingent of birds may get with a collage of calls going simultaneously at dawn in the spring. Neither of these works have any dissonance involved but they manage through their irregularity to sound modern in a sort of ambient post-minimal way. The latter piece is much denser because especially of the strings and their multiple-stop capabilities that Byron takes advantage of. It is more frenzied, too, in an organic kind of way with rapidly articulated phrases that intermingle and interpenetrate. There are repetitions (in a sense like different bird calls) that meld together so that it's not the individual motifs that stand out as much as the entire collectivity.

"As She Sleeps" (2000) is a dynamically contrasting solo piano meditation on a lovely chordal progression that strikes one as having some relationship to Satie in a lyrically mystical mood. It is a fitting end to this disk and groups in some ways with the first two compositions on the program, "Continents of City and Love" (2001) and "Tidal" (1981), both of which are beautiful in a relatively placid manner. "Continents" features nicely paced, slow moving chordal forms in the strings that are punctuated by foregrounded piano figures that break through the sustained beauty with more percussive but related diatonics.

"Tidal" has a similar trajectory only the two-piano interplay is much busier with repeated arpeggiations and melodic cascades played atop a lovely set of slowly moving and sometimes static chordal drones.

I must say it all appeals to my sensibilities. There is beauty and a sort of quiescence-to-turbulence-to-quiescence arc to the entire sequence that pleases and brings one on a kind of musical journey.

Based on this disk it is clear that Michael Byron is another talented voice in Cold Blue's presentation of "radical tonality". His music is neither neo-classic, neo-romantic, neo-modern or quite minimalist either. It straddles the fence and by so doing creates music of our present, music that might not have been possible 50 years ago because we would not have been prepared for it. We are now and Michael Byron gives us his own window into the possibilities, and a fine program too. Recommended.