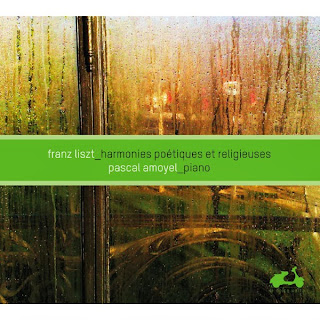 Of all the pre-modern composers for the piano, certainly Franz Liszt would be towards the top for the vast creative resources needed to perform many of his works satisfyingly. The phrasing, use of pedals, rubato, the general articulation, all can be complex and can demand a real poet of the pianoforte to make the music as brilliant and exciting as it was meant to be.

Pascal Amoyel is just that pianist, as he shows on his 2-CD set of Liszt's works, Harmonies poétiques et religieuses (la dolce volta 107.8). The set was recorded in 2006 and has been reissued for our appreciation.

We tackled Amoyel's Charles Alkan set last year (see search box above) and found his interpretations irresistible. Not surprisingly, he is equally masterful with this set of Liszt. The works here are some of the most poetically demanding, not the least the title works "Harmonies poétiques et religieuses", but also "Liebestraum" and the "Ballade No. 2", among others.

Amoyel comes through with expressive magic. Technique is ever harnassed to Liszt's musical voice. Amoyel's rubato accentuates the striking beauty of the music rather than sounding like someone gasping for air with over-emotion. Amoyel lingers where he feels, is in no hurry to get through, gives the cascading musical evocations their due weight, in short gives us as imaginative and stirringly lucid a performance of these pieces as we are likely to hear today.

Amoyel creates a Franz Liszt not mawkishly overwrought, but rather thoughtfully profound, which surely is how Liszt conceived of it all. This set is a marvel.