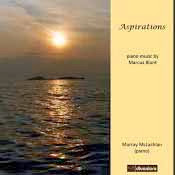 Today's CD of piano music seems like a new age item if you look at the cover. It isn't. It is a collection of selected piano works of one Marcus Blunt, as played by Murray McLachlan (Diversions ddv 24148). There are 9 compositions/sets of compositions written between 1967 and 2006.

Blunt writes pieces that often have an introspective quality. The music is not quite romantic; the mode is often chromatic with definite tonality but in the stretched, early modern sense. You can hear the influence of Scriabin, but not directly. It's somehow beyond that into today. Blunt works within an expanded palette that doesn't show the mystical agitation of the Russian composer, but instead goes its own way in a rhapsodic, mostly quietly reflective manner.

Murray McLachlan brings out the nuances and mood of the pieces nicely. It is recommended for those who want something refreshed yet familiar somehow. Good music!