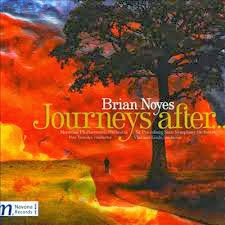 Welsh composer Brian Noyes comes front and center today with two of his orchestral works. Journeys After (Navona 5938) features "Point of Decision" and "Shadows of Memory". Both have to do with peasant-poet John Clare, early 19th century native of Northamptonshire who escaped from a mental institution and went on an 80-mile walk home in search of his imaginary love. I suspect he didn't find her but the entire experience was enshrined in his "Journey Out of Essex".

Noyes takes that experience as the subject matter for the two works we hear. The lengthy "Points of Decision" has a very mysterioso way about it--modern, evocative, on the neo-impressionist side of things in its vivid orchestral color. The shorter "Shadows of Memory" is more turbulent and harmonically stretched. Both works show Noyes as a figure to be reckoned with in the new orchestral sphere.

These are somewhat difficult scores to perform, I'd imagine, and they are given spirited readings that certainly give us a very solid impression of the works. Whether later versions will surpass these I do not know, but hats off to the Moravian Philharmonic under Per Vronsky and the St. Petersburg State Symphony Orchestra under Vladimir Lande.

I hope we hear much more from Brian Noyes. In these works he shows himself to be a natural in the orchestral realm. Bravo!