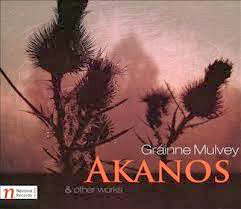 There are some present-day composers one takes to almost naturally, depending on one's background and listening habits. I found such a composer in Grainne Mulvey, an Irish practitioner of the sonic arts of high modernism. She has a new album out, an all-Mulvey program named Akanos (Navona 5943) after the opening orchestral work featured on the disk.

The press sheet accompanying the release tells us that hers in a music of opposites, and you can see how that works in the pieces for live performers and electronic sound. Otherwise hers is a music of the epic gesture, high level sound color essays, a music at once post-Xenakis-ian and post-Berio-ian in direction.

From there we hear five works for a live instrumentalist and electronics, involving two for flute, two for soprano, one for cello plus a ten-minute work ("Steel Grey Splinters") that makes good use of unusual timbres on the piano.

What impresses about the electronic-live works is the finely attuned way the electronics complement the live part and vice versa. "Shifting Colours" for example brings to the electronics manipulated flute and breathy sounds that act as a kind of specially sonic orchestra to the flute's solo part.

Ms. Mulvey gives you fully developed electronic scores in the more through-composed classic avant sense. The sounds have flow and structure, in other words.

I would love to hear more of her orchestral works in particular, since "Akanos" is a wonderful kind of teaser for what I hope is a large body of works. The electronics-performer pieces are satisfying in themselves, however, so there is a good bit of her music to digest and appreciate.You don't feel that there's anything missing. She has style and dramatic power, of that there is no doubt.

Thoroughly recommended for those who respond to well-wrought avant classical.