The Voice of the Turtle Dove, Sheppard, Davy, Mundy, The Sixteen, Harry Christophers 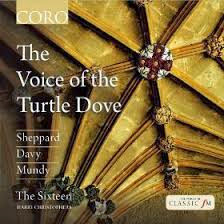 The unfolding events which made a martyr out of Thomas More and in no way caused his Utopia to disappear but rather to be widely read over the centuries did not correspond to the fate of the music of some of the pre-Reformation English composers. Much of their music sank into obscurity for centuries, sadly.

The Sixteen give us an enchanting look at three such composers in The Voice of the Turtle Dove (CORO 16119). Harry Christophers takes his customary place as director-conductor as they wend their way through eight works by the forgotten masters Richard Davy, John Sheppard, and William Mundy.

The Sixteen have addressed this period before in a good number of recordings. It was what brought them to notice in the early days of their existence and the present set shows they have by no means exhausted the repertoire. Each of the three composer get notable representation with a longer and several (sometimes interrelated) shorter works, some secular, mostly sacred, all ravishingly performed as well-crafted examples of English brilliance. We get antiphons, responsories, in all a memorable exploration of period counterpoint offering endlessly beautiful labyrinths of sound.

I am a novice of this period of English choral music. One need not be an expert to recognize the beauty of the works and luxuriate in their ravishing execution by the Sixteen. This is a real winner.