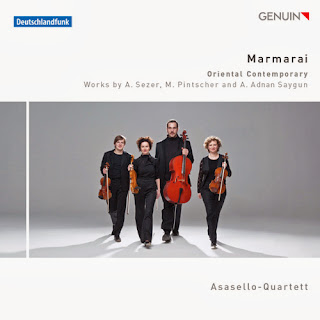 Sometimes the "what" of a recording gives us something so unusual it needs explaining before even thinking about "how (it sounds)". We do have that today with Marmarai, Oriental Contemporary (Kunst Stiftung NRW Deutschlandfunk 14298). The disk contains three string quartets and one string trio from composers both European and Eastern: Matthias Pintscher (b. 1971) from Germany, Ahmed Adnan Saygun (1907–1991) and Ataç Sezer (b. 1979) from Turkey.

The Asasello Quartet takes on these works with verve. All of the examples share in common a modern approach.

Ahmed Adnan Saygun's String Quartet No. 1 (1947) is both modern and in tonality and melody makes very overt and effective use of Turkish minor modes and pentatonicism with passages that blur into modern quasi-dissonance. The liner notes on the disk spell out his formative status as the father of modern Turkish classical, Turkey's Sibelius, so to speak. The music gives us plenty to appreciate. It is a piece that perhaps could be thought of as paradigmatic to an eastern nationalist-modernist approach

Ataç Sezer's two works, "Subject, String Quartet" (2008), and "Flow, String Trio" (2010) show the full impact of contemporary string techniques and sound color/multilayered compositional outlooks of the high modern avant garde of the last half of the 20th century. A close listen will discern some overtly Turkish elements, but there is in ultimate effect more of an internationalist approach than that of Saygun.

Seemingly the odd-man-out in this program is Matthias Pintscher. But he taught Sezer composition for a time and stylistically he parallels the Turkish composer in the multi-layered quality of his work. "Study IV for Treatise on the Veil, String Quartet" (2009) is one of four of his works to address the Cy Twombly painting by that name. It is a well crafted work that fits right into the program.

In the end this is a disk that explores three worthy and rather unknown composers with excellent performances of their chamber works. It is for the musical explorer more than the modernist beginner, but also affords an excellent window onto two important Turkish composers.