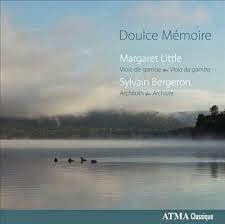 Improvisation flourished in 16th and 17th century Europe. For small combinations of instruments such the viola da gamba and the archlute there were practices involving improvising over a harmonic-bass line (rather similar to "playing on changes" in jazz), or taking a well-known melody and subjecting it to embellishments, playing with notes surrounding the long note at hand or breaking that note into a series of shorter notes, then doing the same with the next long note, etc. There were also practices involving transforming a four-part madrigal into a single very embellished line.

There were pieces written out back then in various manners to demonstrate the techniques involved. Margaret Little, on the viola da gamba, and Sylvain Bergeron, on the archlute, present us with a fascinating program of such demonstrations on their album Doulce Memoire (ATMA Classique 2685).

There are 17 such works in all, based on popular madrigals and other melodic-harmonic lines then current. These are put together by composers not well known today, except for the ubiquitous "Anonymous". Otherwise there is John Banister, Diego Ortiz, and an assortment of others. What of course matters is that the anthology spells out and demonstrates beautifully the practices current at the time.

Little and Bergeron are eminently proficient artists who bring us this music with all the grace and verve of the era.

You must hear the music and read the helpful liners to fully grasp the revelatory nature of the project. Since we do not yet possess a time machine, this is the next best thing to uncover music that existed in the immediacy of the live moment.