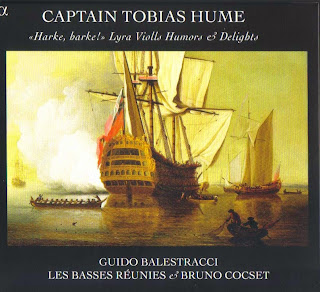 The fate of the outsider artist over time depends as much on fate as well as talent. In music for every Moondog or Harry Partch, there may be other talented composers outside of the mainstream whose music remains undiscovered, in time as much a factor of chance rediscovery entering into the picture as not.

Such a figure up until now has been Captain Tobias Hume (1549-1645), an English sea captain who as a sort of hobby composed and played music for the lyra viol, a six-stringed member of the viola da gamba family, roughly cello-like in size but with a more resonant tone and a wider range. He was a music natural, not formally trained in the academic art of music in any conventional sense. Two collections of his music were published in London in 1605. By the time of his 1645 death in circumstances of poverty he was already all-but-forgotten.

Guido Balestracci, Les Basses Reunies and Bruno Cocset have turned to those publications and made a nice selection from them in their album dedicated to his hitherto unknown music "Harke! harke!" Lyra Violls Humors & Delights (Alpha 197).

Maestro Balestracci plays the solo lyra viol part, at times unaccompanied, other times with a viol consort of Bruno Cocset on the dessus viol or a second lyra viol, Richard Myron on the consort bass, and, as needed, Bertrand Cuiller on the clavecin.

The sound of the violls are inimitable, rich and complexly reverberant. Hume wrote the viol parts in tablature, which means that the fingering positions are shown clearly for every note, but the tuning of the instruments, apparently according to practices of the time, are left to the players. The present recordings give us likely tuning choices and they give the players stops and open notes sounding very different to the present-day violin family. There are some very folk-like elements in the music, as well as a general jauntiness, skilfully done but not as subject to the rules of counterpoint and compositional practices of the day. The tunefulness and craftsmanship of the 25 brief works heard on this album are not to be denied. The combination of exceptional timbre and compositional inspiration make for very pleasurable listening.

Pieces are sometimes articulated pizzicato and give forth with uncanny sounds. But the bowed works no less so.

Balestracci, Cocset and Les Basses Reunies give us beautiful, idiomatically exotic readings of the works that make the Captain come alive for us once again, at least musically. It is a triumph of early music reconstruction that anyone who already knows and loves viol consort music will appreciate, but so will those who know nothing about the style and timbres. It's the sort of disk to play for a friend who thinks he or she knows early baroque music and how it sounds!