John Cage, Sonatas and Interludes, In A Landscape, Kate Boyd 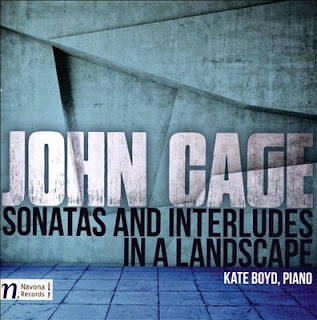 I don't think there is any question that with composer John Cage his most popular and best-loved composition is the "Sonatas and Interludes for Prepared Piano." It is a rather early work (1946-48) and it has an ambience and inner explorative sense that was unprecedented at the time, save (now that we have hindsight) for some of Erik Satie's piano music. The music has given many listeners lots of joy, as far and above a favorite among those who may not otherwise know Cage well. The "silent" piano piece may be more notorious, but it not surprisingly is not heard, pardon the pun, often. In fact it is not heard at all, which of course is the point.

There have been quite a number of recordings of the sonatas over the years. Now we have a new one by pianist Kate Boyd, programming the Sonatas and Interludes with In A Landscape (Navona 5984). Most people know that preparing a piano involves placing a wide variety of objects on or between piano strings, so that the sound takes on a very "other" quality. Cage invented the process and much of his work in the vein was intended initially as music for the dance companies he worked with.

The prepared piano sounds well enough like a percussion orchestra more than a piano per se. Many if not most of the recordings of the "Sonatas and Interludes" treat the music as if it were percussively rhythmic, which if course it is. Kate Boyd's new recording has that quality, but it also has a very pianistic approach, more so than any of the many recordings I've heard over the years.

And that is what makes this version stand out. It has as a result perhaps a more Asian or mysterious quality of, say, traditional solo string music from Japan or China. As a result the music sounds less like it is a Western analog of gamelan music from Java or Bali.

Kate Boyd gives us some rubato, some sensitive pianistic phrasings and dynamics, and much in the way of nuance that put the music more squarely in our heads as PIANO music. In the closing of the program we are treated to a bonus-encore of another Cage piano work from the same era (this one unprepared), "In A Landscape." She gives us a warmly poetic, pianistic reading of this work as well.

I believe anyone serious about 20th century modern music needs to have a recording of the "Sonatas and Interludes" in her or his collection. Ideally one might have two, one for a more percussive interpretation and then this one by Kate Boyd.