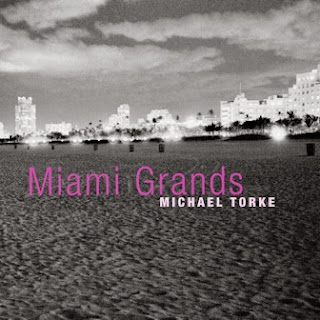 It happens to be Thanksgiving morning here in the States. And to show my thanks for the music I post one more before getting on with the day. Today a most unusual work, scored for ten grand pianos, written by Michael Torke, a minimalist-post-modern composer with his own special melodic gifts.

Miami Grands (Ecstatic ER092251) consists of 12 movements, mostly major diatonic music in a lyric mode. There is a small amount of repetition now and again, but either in ostinato form or continually developed, so that it sounds not-so-much minimal than what might be heard in works of an earlier period. What is a constant is a propulsive continuity, an almost pop-rock barrage of sound that when all ten pianists get going is considerable.

There is a clear air brightness about it all. The rather chipper music comes off as continuous melody, with modulations at times, generally through-composed and more open than an a-b-a song form would be.

It is contemporary sounding without much of a neo-whatever hearkening back. The huge sound of the amassed pianos make this one very out front, a boldly going forward sort of music.

I found it rewarding to hear and very up in mood. You want an energy booster, this one would do that for you.