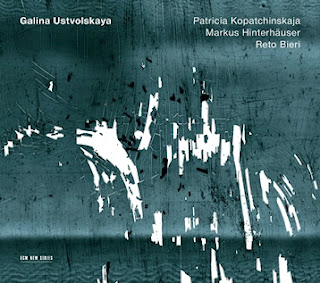 Russian composer Galina Ustvolskaya (1919-2006) is new to me. An album of her chamber music came out in the last few months (ECM New Series 2329 4810883) and I have been captivated with it. Patricia Kopatchinskaja (violin), Markus Hinterhäuser (piano) and Reto Bieri (clarinet) present three of her works with great deliberation (something her music most surely demands) and sympathy.

Ustvolskaya studied with Shostakovich but does not especially sound like him, except perhaps for a certain severity that Shostakovich could show at times in his smaller ensemble music. Otherwise Ustvolskaya sounds quite original, more intervallically and harmonically modern than not, especially as she progresses to later works. There is a rhythmic insistence throughout and a kind of presentational clarity untypical of composers of her era.

The earlier works are also austere and periodically phrased. There are occasional thematic tattoos in a kind of deliberate Morse Code, and intervallically defined motion. I sometimes hear a bi-tonality so that even diatonic movement is made more tonally decentered.

Patricia Kopatchinskaja gives us sometimes starkly ferocious, sternly dramatic readings that are amplified and seconded by Markus Hinterhäuser and Reto Bieri. The performances seem just right. I must say that the music as presented here has a dynamic and dark presence more like a winter landscape than a promise of spring. Is the music bitter? It is most definitely not sweet. It is not cheerful. There is abstraction enough though that one does not find oneself searching for the music's meaning. The meaning is itself, the notes and the sequence.

The recording may be somewhat demanding but important modern music can be that way. If you open up to Ustvolskaya she delivers her powerful art in ways that take you to the center of her music. And that is a good place to be.

Ustvolskaya needs to be heard, judging from this dramatic sample of her work. It is a recording of importance, a bit of a milestone on the current modern music scene. Do not hesitate if you look for something new under the sun. You will be moved, I'll bet.