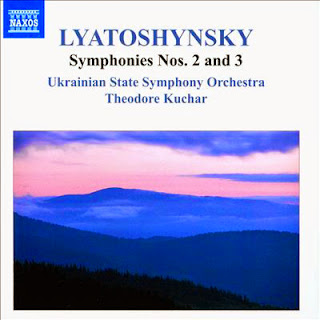 The fate of modern Ukrainian composers during the Soviet period varied with shifting political-ideological agendas, as I understand it. There was a period of relative freedom of expression, followed by a social realist agenda under Stalin that took a dim view of anything not connected with ideological uplift, then the thaw for the decade when Krushchev was in power. As a result Boris Lyatoshynsky (1895-1968), considered the father of Ukrainian modernist composers, had obstacles to surmount at times in the official acceptance of his music.

Naxos is happily reissuing a series of three CDs covering Lyatoshynsky's complete symphonies (1-5) that were originally issued on Marco Polo some time ago. The first, covering Symphony No. 1, I have not heard as yet, but the second and third volumes I will cover here in the next several days. Today, Volume Two, with Symphonies Nos. 2 and 3 (Naxos 8.555579). Theodore Kuchar conducts the Ukrainian State Symphony Orchestra in some quite serviceable, even inspired readings of the two works, written in 1935-36 (rev. 1946) and 1951 (rev. 1954), respectively.

Lyatoshynsky in these two works comes through as more his own voice than derivative. He uses Ukrainian folk influences and a basic chromatic modernism along with a somewhat romantic expressivity in the works for a result that has a narrative symphonic quality, at times mysterious, other times opening up chromatic whirlwinds of unfolding variations and long-lined melodic forms.

I have listened to this disk quite a few times and must say I cannot seem to wrap myself around this music as yet. It is doubtless well put-together, quite emotive, orchestrationally dark with spots of luminosity, at times very "Ukrainian" sounding, which of course was his intent.

The performances are not lacking and there is much to intrigue. It is music of great dramatic clout when he fashions climaxes. But Lyatoshynsky in this period may require a long period of incubation in the listener before a clear grasp of his way becomes apparent. I found that to be the case with Shostakovich at certain periods, personally, so that says nothing about the composer. I need to listen more. In the meantime anyone with an interest in Eastern European modernist symphony would be well-served by hearing this music.