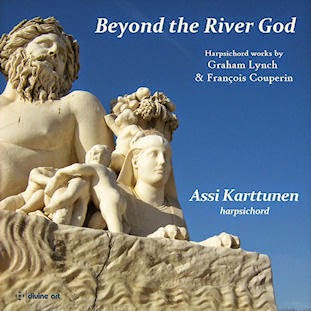 Given the present-day, anything goes stylistic polycentrism that contemporary new music enjoys, we should expect any number of possibilities. So the dualistic program of harpsichordist Assi Karttunen on her Beyond the River God, Harpsichord Works by Graham Lynch & Francois Couperin (Divine Art 25120) should not surprise us. Yet a recital that alternates between French baroque master Couperin and rising modern composer Lynch is nonetheless an unusual one.

What it does in part is give us the chance to gauge any similarities and of course differences between the musical personalities, the eras represented and to bring us potentially contrasting sounds for the harpsichord.

Ms. Karttunen does a fine job with both series of works. The handful of Couperin pieces are generally well-known and she plays them with baroque grace. And she does complete justice to the Graham Lynch works as well, which are modern yet at times thoroughly neo-classical. Relatively young (b. 1957), London-born Lynch gives us music that seems specially suited to harpsichord sonorities.

In all we get six Lynch works/suites, the five-part title work, "Admiring Yoro Waterfall," the four-part "Petenera," "Ay!," the three-movement "Present-Past-Future-Present," and the brief concluding "Secret Prelude."

All make use to greater and lesser extent of an early classical veneer that at time runs deeper, but all in all there is a fantasie-like impromptu feel to the music, which strays pretty far at times from baroque thematic and harmonic orthodoxy, which is to be expected and even desired. Other times both musics share an expressive oneness that you may feel goes beyond the details of each composition, and sometimes Lynch makes a point of reaching back, only to go forward again. At least that was my reaction.

There is much worthwhile music to become familiar with. The regular recurrence of a Couperin classic grounds us with the accustomed while the Lynch explores various possibilities of what lies beyond it.

In the end we get a good deal of music that underscores what expressive means the baroque and the modern/postmodern share and how the harpsichord and specifically Ms. Karttunen act as the pivoting center to all the music. It is certainly a feather in the cap for Assi Karttunen and for Graham Lynch. At the same time it is music on a high level.