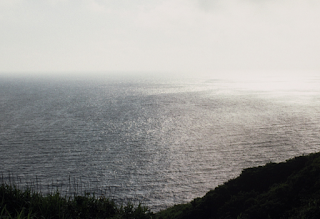 When I was young there were thousands of jobs in my area for delivery truck drivers--not just the post office, but the milk man, the bread guy, the cleaners, even somebody peddling fruit. Not many families had two cars then and the housewives depended on deliveries. Our mailman was the most regular and the most important one, at least to me. He seemed to be a happy soul. He was ALWAYS whistling. And being a musically inclined kid I used to listen to WHAT he whistled. It was never a song that I recognized. Instead they were seemingly open-ended, non-periodic diatonic melodies. He might linger on a phrase a few times, then move on. I don't hear much whistling anymore; but never again did I hear quite this kind of whistling and it stayed in my mind.

The music of Michael Vincent Waller at times reminds me of our mailman from back then. I am speaking of his new two-CD set of chamber works, The South Shore (XI Records XI136). (Look for Michael in the search box above for reviews of two piano disks that preceded this album.) Michael has at times tapped into the folk diatonic mind (and sometimes pentatonic as well). Like that mailman, only of course considerably more sophisticatedly, he ignores the obvious periodicities (aaba, etc.) of song form to build sprawling diatonic (or pentatonic) melodic sequences. They may have repeated and related variation sequences that in some ways do what 12-tone composers used to do with chromaticism, that is to build towers of melodic sounds that become variations on variations. Not to say that Michael is subjecting his melodies to some rigorous rules of sequence, for it feels more intuitive and in that way a reflection on the folk mind (of my mailman, but more phenomenologically of the universal folk mind in everyday life).

This perhaps is a rather gross simplification of his approach. There are also times where there is more rapid passagework that suggests the east, perhaps a little redolent of gamelan passagework. And there is more besides. He is not in the "Radical Tonality" school of some of the Cold Blue label composers, because they use diatonicism as ritually ambient presences and Michael does that not so much. He is another kind of tonal simplissimo structuralist.

Throughout all these instrumental configurations we get a kind of singing (or whistling) forth, a whisp of natural expression sometimes reminiscent of Asian classical and its heightened melodic spatiality in silence.

It is music that engages somewhat disarmingly. But then you go back and there's more to it on further listens. I don't know what the world will make of this music but I find it, like some Satie, deceptively simple with a sort of underlying folk-mind sense to it.

Listen and decide for yourself. It is worth your time!