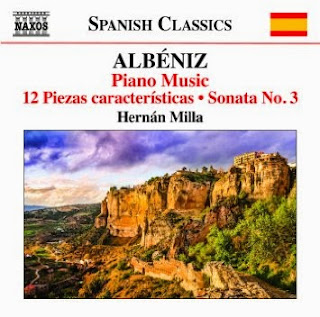 Isaac Albeniz (1850-1909) was a prolific and important Spanish composer. His early years were devoted to writing in a salon style. By around 1885 he began to combine traditional Andalusian Spanish elements into a quasi-impressionist style, ultimately writing masterpieces for solo guitar such as "Granados" and the very beautiful piano suite "Iberia." He was a supreme melodist and an inspired craftsman. Outside of specialists most of us haven't heard but a fraction of his lesser-known works.

Naxos in their ever-admirable goal of completeness have gotten up to a seventh volume (Piano Works 7 [Naxos 8.573160]) of solo piano pieces. Since I have not had as much experience with the lesser-known Albeniz I thought I'd check in with the latest volume. Does it stand up compositionally to the highest heights of Albeniz in this peak years? The answer is no, not quite. But then I would say, "but still..." because there is much to like on this disk.

Pianist Hernan Milla does the honors as the pianist on this volume. And he plays with a sympathy and flair that seems just right for the music.

Essentially the volume covers two substantial works, the suite of miniatures "12 Piezas caracteristicas, Op. 92" (1888) and the "Sonata No. 3, Op. 68" (1886). These are a product of the very beginning of his most inspired period, ending with his death in 1909. So we get a good variety of styles, some more in a salon or later romantic vein (the latter especially so on the "Sonata"), some with the first fruits of his Andalusian-influenced neo-impressionist style. The miniatures for all that are very much worth hearing. The music can be charming, enchanting, contentful or somewhat less so. There is nothing mediocre to be heard and ultimately much of it comes as a breath of fresh air.

I would not quite say that this volume is indispensable. I am sure there are earlier volumes more in line with the best-of-the-best. Nonetheless he is never less than accomplished. And there are moments of true brilliance to be heard here.

Anyone with a deep interest in the Spanish scene of the early modern period should probably have it all. "Iberia" is a must-have for anyone, but I have no doubt there are lesser-known treasures in the first six volumes as well. This one comes through like the first rays of spring sunshine. It is not yet a full-bloom Albeniz but very much a budding one. The listen is an excellent one.