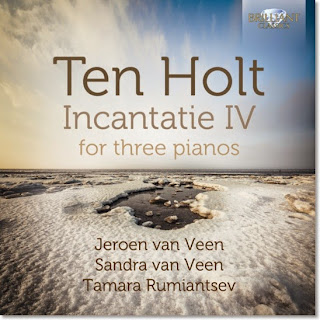 Minimalist repetition (or what Gertrude Stein called "insistence") was hardly a new thing in essence when works started appearing under that rubric. African and Balinese music, for example, had made it a part of the music for many centuries, blues and rock had it as an important part of the music, and of course one might look elsewhere as well. But for a combination of insistence and a more or less classical framework, Satie may have been the principal progenitor but it was something new nonetheless.

By now there have been a good number of works to experience, some better, some less better, but by all means Simeon ten Holt (1923-2012) can be considered one of the major exponents. I say that after I have listened in depth to the 4-CD performance of Canto Ostinato XXL by Jeroen Van Veen and company (see my November 17, 2014 review) and now Incantatie IV (Brilliant 24918, 2CDs) for three pianos, performed by Jeroen and Sandra van Veen and Tamara Rumiantsev.

Like the Canto Ostinato XXL it contains choice on the part of performers as to what to include and what to leave out, along with choices in timbre and pitch, style and tempo, instrumentation and length of repetitions. Van Veen and company choose a moderately fast tempo and put the music in a minor mode. The score has complexities in its 15 layers. The three pianists negotiate them deftly, coming up with material from the score that would sound well even if not repeated, in a way that in the end is very pianistic. And perhaps that is one of the keys to what makes Simeon ten Holt so intriguing, that the compositional materials are composed of thematic elements that hold interest both in their repetition and in their transformation. Not all minimalist exponents are melodists of this caliber. Riley and Reich, surely, but some others less so.

And even then Simeon ten Holt's transformation options are sequentially dramatic but interrelated in fine ways, perhaps more classical ways than with some composers. That and the van Veen ensemble's very skilful and music interpretations make this music come alive beautifully. In the end Canto Ostinato XXL may have a slight edge in my mind over Incantatie IV, but one should ideally revel in both.

Ten Holt is up there with the very finest minimalists; Van Veen's ensemble is the one to give the music its just due. The music both sings and swings admirably. Fabulous!