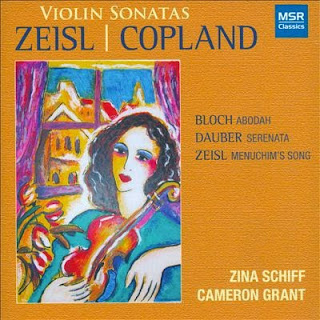 For the last posting on the month, I have at hand an anthology of modern violin-piano music, Zeisl & Copland Violin Sonatas (MSR 1493), played well by violinist Zina Schiff and pianist Cameron Grant.

Copland and Bloch do not need an introduction, since they are of course well-known. Less will be familiar with Eric Zeisl, who had established a burgeoning career as a composer in Vienna before the Nazi onslaught forced his immigration, eventually to Hollywood, in 1941. He composed the soundtrack scores for more than 20 films between 1942 and 1958. He is less remembered for his concert work, but all that may indeed change with the advent of his music sounding so well here.

Robert Daucher composed the "Serenata" while yet only 20. He was a Holocaust victim, killed at Dachau in 1945, aged 23.

The music is uniformly worthwhile, with Zeisl and Daucher holding their own against their better-known contemporaries. All of the music here is neither rabidly modernist nor exactly neo-classical or neo-romantic. It is music that revels in the "Jewish tinge," soaring minor mode melodies, jaunty dance-inflected music and modern compositional elements, all played with genuine idiomatic musicality by Schiff and Grant.

It is refreshing, delightful music that rings true and gives great pleasure. I do recommend this one heartily.