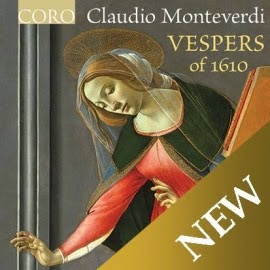 The Sixteen under Harry Christophers has created an impeccable track record for early music performance, with a small choir and original instruments, spirit and authenticity as a kind of gold standard from which they do not waver. So when they perform Claudio Monteverdi's Vespers of 1610 (Coro 16126 2-CDs), a masterpiece in early sacred repertoire, you expect something worthwhile. And indeed that is what you get.

The "Vespers" was a kind of unified portfolio of compositions for the Vespers service, designed to gain Monteverdi the job of Choirmaster at the Basilica of St. Mark, Venice. The music impressed to the point where he in fact did get the nod for the position, but of course they stand out as an outstanding body of work that when performed in their entirety (something that may not have happened frequently in his day, if at all, since the music called for various choral and instrumental resources not always on hand.) give us all the inventive glory of Monteverdi at his best.

The Sixteen most definitely excel on this recording. The choir, soloists and instrumentalists succeed in giving us a definitive performance, one of the very best out there.

Everything sounds quite striking and energized, and the great variety of settings keeps the ears gloriously busy for the duration. Christophers tunes singers and instruments to 17th-century meantone temperament throughout, which was an untempered standard of the era--but with modern musics would sound decidedly off if the music modulated upward. With Monteverdi the music was meant to sound well with the pure intervallic structure. This as Christophers notes in the liners gives us "a much enhanced resonance in both choir and orchestra, with all major chords performed with pure thirds." This in part accounts for the "sweetness" we hear palpably on the recording.

As a fascinating bonus on disk two, the Sixteen give us two versions of the concluding "Magnificat," the "Low" version indicated in the part books which involve a transposition down a fourth, and a "high" version where the movement stays with a non-transposed tonality. I find both convincing. Nevertheless it is the sort of detail Christophers attends to, an example of attention to period performance practice (along with the untempered tuning) that gives us a real window onto how the music was meant to be sounded then.

In the end we have a marvelous experience of Monteverdi and his brilliance on this recording. I came out of close repeated listenings with an even greater appreciation of his art, the virtuosity and inventive genius so well displayed here, thanks to this beautiful, enthusiastic yet measured rendition.