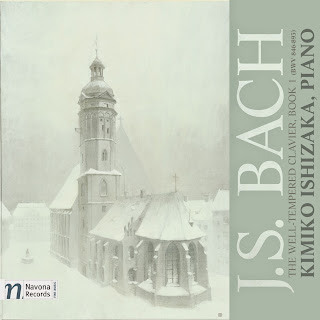 Over the years of listening I have embraced Bach's Well-Tempered Clavier ever increasingly as a masterpiece that rewards with an untiring unlocking of its subtleties as you hear it again and again, in all the versions one might come across that approach the music with sincerity and purpose.

Yet in all the years, all the versions, I have never heard "Book 1" done better than on the new recording by pianist Kimiko Ishizaka (Navona 5993, 2-CDs). She has been celebrated for the "Open Goldberg Variations" which she has made available on CD and for "pay what you choose" download on the net. I have not heard that but after listening to her "Well-Tempered Clavier" I surely will. The main thing here is she has gathered an underswell of public enthusiasm for that rendition that carried over to a funding campaign that made the present recording possible. And I am very glad of it.

So what is it that makes Ms. Ishizaka's version so special? She like Glenn Gould does not shy away from the piano's qualities in her reading. Gould made of the "Well-Tempered Clavier" a series of virtuoso pieces that were and still are enthralling to hear, and the piano's sonarity has much to do with the effectiveness of his version. Kimiko Ishizaka takes a different approach, one which is equally pianistic.

Yes, she can take things at a rapid clip when that seems warranted. But her singularity of vision is to avoid the sustain pedal completely, more or less staying away also from excessive rubato, only using it when some of the preludes seem to call for it. Otherwise her mission is, in every way possible, to bring out the clarity of each part, to achieve total parity, total equality between parts. This is achieved beautifully by articulation, varying strokes at times to bring a part into increased presence, and a poetic naturalness of phrasing that brings your attention to the whole unfolding.

She worked on this in part by practicing each Prelude and Fugue in total darkness, to allow her a total focus on the sound being produced.

The results are fabulous. There is a great grace to what she gives us, a marvelous clarity, a sense of totality that is a very real joy to hear. She takes Bach at his word, that each part is important in the ultimate contrapuntal result. You hear Bach with new ears. Her use of dynamics is key, too. She can subtly build dynamically or for that matter play some sections in a more or less pianissimo way. All of it works together to bring you Bach in all his glory.

The minor-keyed segments are exceptionally well done, but then so are the major-keyed preludes and fugues. Here we have a poetic reading that respects and brings attention to every note and how it fits into the total scheme of things.

There have been other beautiful versions of "Book 1." This is up there with the very best. At the moment it is most certainly my favorite. Bravo, Kimiko Ishizaka! Onwards to "Book 2"!

Posted by Grego Applegate Edwards at 8:36 AM