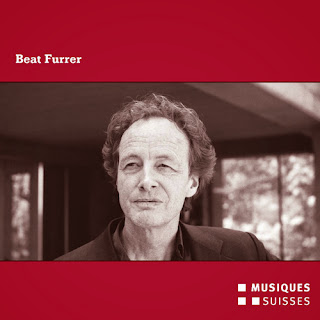 Any first exposure to an unfamiliar composer or even an unheard work is a kind of encounter where you open yourself up to whatever may follow. Laws of probability as to style and your own personal temperament then come into play, but the outcome is open. That is what I have been experiencing with the composer Beat Furrer (b. 1954) and his album Chamber Music (Migros CTS M-141) which covers the period of 1991-2011.

Furrer is Swiss born but has lived in Austria for some time. He studied with Haubenstock-Ramati before embarking on a career of composing, teaching and conducting. I am not sure how I have missed him thus far but the present volume makes up for it with some music that is most stimulating. The album contains five works that showcase nicely his later chamber music.

The works show Furrer as a composer who has digested the lessons of high modernism fully, takes the basic premise of abstraction and sound color into his own generative palette, yet often gives the tones more space between the notes, giving the overall trajectory an ambiance not always a part of the high mod camp. He also can allude to minimalist and post-modern tonality without necessarily being held to the conventions. His music has a wider harmonic expansiveness most of the time and often enough a very open pointillism not typical of those styles.

The works are presented chronologically in time, beginning with the 1991 "Aer" for clarinet, cello and piano, and concluding with the 2011 "Studie" for solo piano. In between we get "...cold and calm and moving" (1992) for six chamber players, "Lied" (1993) for violin and piano, and "auf tonernen fussen" (2001) for vocalist and flute.

The performances are world class, the music exceptionally well-wrought and original. On the basis of this fine album I am now a Beat Furrer enthusiast. He has a mesmeric touch and sense of presence that comes at you at once. Anyone in the modernist corner will surely get much from this release.

Don't hold back. Get this one and you will doubtless be glad of it.