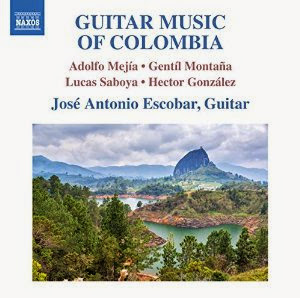 The tradition of vibrant Latin American guitar work thrives in Colombia, as can be heard in the rewarding new anthology by guitarist Jose Antonio Escobar. Guitar Music of Colombia (Naxos 8.573059) presents us with five works/suites by composers of this and last century. To be sure those Colombians in the know would recognize the composers; we who do not specialize in knowing such things may not, but in any event we are in for a treat.

For this is music of great invention, placing virtuoso demands on the guitarist yet giving us the sort of brilliance of the Latin American guitar tradition that plays out with beautiful melodic and rhythmic vitality.

Adolfo Mejia (1905-1973) shows that in the brief but intriguing "Bambuco en mi." Gentil Montana (1942-2011) comes through formidably with his "Suite Colombiana" No. 2 and No. 3. The younger generation is represented ably by Lucas Saboya (b. 1980) and the world premiere recording of "Suite Ernestina" while Hector Gonzalez (b. 1961) finishes off the program with his "Preludio."

Traditional dance forms and the influences of Spanish colonial, African and Amerindian music combine to make these Colombian works sparkle and stand out as central to the guitar repertoire of our times. Jose Antonio Escobar performs them with poetic grace and a fine touch.

These are some of the loveliest guitar pieces you've never heard. But even if you have, Maestro Escobar gives them definitive treatment. Guitar Music of Colombia is a winner, hands down. Highly recommended.