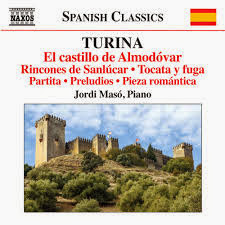 There is such a wealth of modern Spanish music that I find much of late that I have not experienced before. Joaquin Turina (1882-1949) is a good example. I have gotten to know and love some of his guitar music, but there is so much more. Here we are, for example, with the Naxos complete piano music project, which is up to Volume 10. That volume, El castillo de Almodovar (Naxos 8.573183), with Jordi Maso as the capable pianist, has been playing for about a week on my player, and I find myself increasingly under its spell.

Turina studied piano under Moritz Moszkowski, composition with d'Indy and later befriended de Falla, Debussy and Ravel. All that fits in with the Volume 10 works, which have some of the classical-romantic precision and uplift of Moszkowski, and are filled with Spanish impressionism not unrelated to the music of the three composer friends. There are six sets of pieces represented in his volume, all written between 1929 and 1933.

In it we have those with Spanish-Andalusian folk influences, some with vestiges of expressive romanticism and a healthy dose of impressionism as alluded to above. The most distinctive are those that combine Spanish and impressionist strains.

Jordi Maso gives us fine renditions of the works, with a nice touch and attention to detail. I found the music rather delightful, with nothing in the set that does not have a thematic and dynamic attractiveness.

It may not be music to challenge our sensibilities, but that is not what Turina is about. He is a grand synthesist and a lyrical force more than a modernist firebrand. And for that he comes through on this music very well. Most enjoyable!