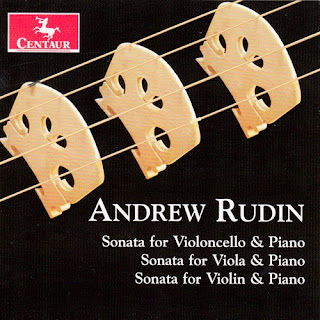 Composer Andrew Rudin came to my attention, and no doubt to quite a few others, with his full-scale electronic work Trageodia, which came out on Nonesuch in the heyday of that label's modernist period, in the late '60s-early '70s. Some later works appeared in a couple of Innova anthologies recently (see the July 29, 2011 and December 15, 2011 review articles on this blog) but other than that I have not had the pleasure of hearing more of his music.

Rudin's three works have a modern harmonic wideness and a rhapsodic expressionism that shades into a reflective, contemplative mode in the slow sections, but also can be rhythmically vital in contrasting passages. The Violin Sonata is the more extroverted of the three but also participates at times in a rhapsodic lyricism.

A brittle lyricism generally prevails. The three works fit well together. They establish Rudin as a chamber composer who goes down his own path, with a modernist originality that has something of the Bergian, Bartokian tradition yet remains very much Rudin.

These are impressive performances of three heretofore unknown gems.

I recommend that all new music stalwarts hear them.