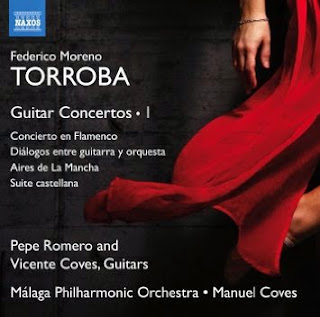 Ever since Rodrigo composed the iconic "Concierto de Aranjuez," the concerto for guitar and orchestra has been a kind of institution. Perhaps no Spanish composer following Rodrigo has been as prolific and productive as Federico Moreno Torroba (1891-1982) in this mode--so much so that Naxos has produced a first disk featuring Torroba's concertos as Guitar Concertos I (Naxos 8.573255) and plans to release two more.

The recording thrives with the presence of guitar soloist legend Pepe Romero for half the program and the lesser known but brilliant Vicente Coves for the other half. The Malaga Philharmonic Orchestra under Manuel Coves provides the orchestral accompaniment with an atmospheric flourish.

Four works are presented in the first volume. The "Concierto en Flamenco" (1962) is an auspicious beginning, with a wonderful rendition of the flamenco solo part as originally realized by Sabicus. Pepe Romero plays beautifully, the orchestra sounds enchanted, and the music is ravishing. This performance alone would recommend the disk. But of course there is more.

There are the "Dialogos entre guitarra y orquesta" (1977) and the early "Suite castellana" from around 1920, both featuring the very capable Vicente Coves, and the "Aires de La Mancha" (1966) with Romero again in the solo role.

All these works give us the Spanish traditional sound, beautiful guitar work, and a sort of impressionist transparency in the orchestrations that weave a magical spell on the listener.

They are works of real stature, played in ways that entrance and delight. It is a beautiful beginning to the series and I commend the album to you in the strongest possible terms. Oye!