Daniel Lentz, In the Sea of Ionia 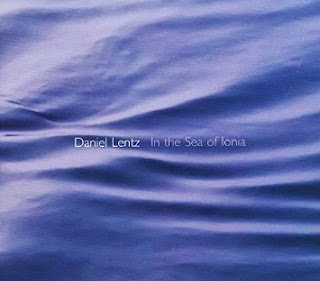 I've said this before but the force of it continues to stay with me as I sample the classic music of our current era. That is, that we've entered a stage of stylistic pluralism. Just as abstract expressionism dominated the art world in the '50s, high serialism did so in the modern music world during that period. Other than the sheer eclecticism inherent in a world class museum or the mainstream repertoire performance circuits, the modern-postmodern scene has subjected us to a number of styles that includes high modernism, revival styles, minimal and new tonalities as well as noise-music, and avant new music which relates to avant jazz and improvisation. All of this exists simultaneously. There is no one arbiter of taste and dominance. Though the art market and prices fetched in galleries and auctions do give us an indication of currency for the visual art market, contemporary music has less generative abilities in its mechanically reproduced and live incarnations so it's even harder to judge on any stylistic hegemony, but there appears to be no one style at the forefront now.

This as I've said isn't such a bad thing. The building blocks of music remain the same, more or less, with melody, harmonic movement (tonal or otherwise), rhythm and timbre serving most composers of today. The question then is what does a new composer choose to do with these elements? Ex-minimalist Daniel Lentz gives us his own take with a collection of solo piano pieces, In the Sea of Ionia (Cold Blue 0042), featuring Aron Kallay as the capable and sympathetic performer.

It's music in a tonal vein, with rhythm entering into the picture as a significant factor, sometimes with a motoric regularity taken over from the minimalist days, sometimes rather romantically rubato but the chord sequences decidedly more contemporary than romantic. Four works/suites are featured: "51 Nocturnes," "Pacific Coast Highway," "Dorchester Tropes" in four movements, and "In the Sea of Ionia."

Lentz here does not quite fit into the Cold Blue "radical tonality" mode that one often finds on that label. His is a music of performative density that does not go in an ambient direction so much as stay within the rhythmic mainstream established via minimalism and its popular-rock-world relation and then, yes, a more rubato approach akin to pianism as we often understand it over the past 200 years. Messiaen occasionally comes to mind as a reference point for the harmonic movement but in no obvious way

There is enough inventive and varied in the program that the attention does not lag. These are perhaps not masterpieces of our age but they are legitimate and distinctive enough that you feel that Lentz continues to be his own man out there. A worthy stylist who may have a couple of masterpieces left in him, certainly. And in the meantime there isn't a banal passage to be heard, in spite of the tonal accessibility of it all.

I find this album stimulating and enjoyable. Recommended.