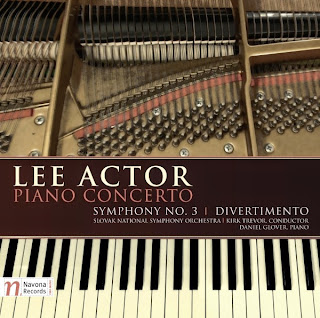 In the ever-permutating stylistic world of modern classical we have music to consider on today's blog post built of neo-classical and neo-romantic elements. The composer is Lee Actor (b. 1952) and his Piano Concerto (Navona 5986) (2012) is the featured work alongside his "Divertimento" (2011) and his "Symphony No. 3" (2013). The Slovak National Symphony Orchestra under Kirk Trevor does the honors fittingly, with Daniel Glover in the piano role for the "Concerto." All comes across well.

Actor is a polymath personality, practicing in his career as software engineer as well as a concert artist/composer. Perhaps this explains his deft manipulation of structural elements in his music. At any rate all three works bring traditional elements to bear in ways that both hearken back and look forward.

The music has a general rhythmic vitality, a sure sense of orchestrational color and an inventiveness that makes his music neo- more than retro-. It is music that has a tonal centrality that does not introduce much in the way of dissonance, instead using rhythmic continuity-discontinuity and thematic development to express a compositional ethos. (The symphony has an increased chromaticism in keeping with a late-romantic/modern ethos, however.)

You can hear both rhythmic and developmental elements especially vividly at work in the "Divertimento" and the final movement of the "Concerto," but it is continually a factor.

Here is the sort of music that grows inside of you with repeated listens. That of course may be true of most classical music but in Actor's case it is especially true. On the first hearing of the program, style hit me foremost. Then on subsequent listens the internal workings within style became more and more apparent and memorable.

"Symphony No. 3" is a good example. There is late romantic seriousness of purpose in the opening movement "Premonition," but it comes at you more and more impressively as you hear the movement a number of times. Perhaps, yes, there is something that reminds you of Schumann, Brahms, Wagner, Bruckner in its monumental moroseness. Yet as you listen again the articulation of the orchestral blocks of sound become more and more Lee Actor and less derivative in the way it all hangs together beautifully.

The inner movements break the spell with a great headlong plunge into rhythmically rapid string figuration and grand punctuations from brass and woodwinds ("Scherzo I"). In contrast "Reflections" begins in a lyrically dark-somber mood, then goes on to a rather chromatic music of contemplation with dynamic outbursts that remind you we are in a post- and neo- world. "Scherzo II" brings us back to fleeting motion, the entire orchestra taking part in the moving panorama of tone with deftly orchestrated passages. The "Finale" returns to an ominous darkness that creeps forward with insistency and shows off the coloration-orchestrational acuity of the composer with distinctive writing for winds, brass and strings in various combinations. Somewhere in midpoint there are darkly dramatic outbursts that gradually build momentum into agitated climaxes of tangible power and clout. The cloudiness of the opening movement returns before a great hurrah ends it all.

So there you have it. Actor comes through with three distinctive works that give us a vivid picture of his latest orchestral music. This is not music on the edge of avant futurism so much as a new synthesis of classical-to-modern orchestral practices, resulting in an idiomatically personal approach that shows thematic and orchestrational prowess.

It is music that one welcomes more heartily back into one's music hearth the more one returns to it. If you like new music that delves into the past transformatively, this will give you plenty to savor!