William Bergsma, The Voice of the Coelacanth 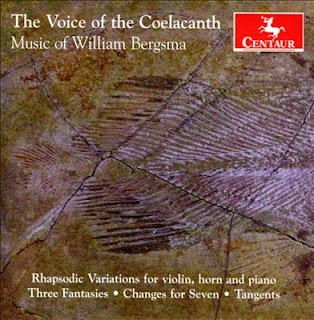 In the old LP days one might often be introduced to a composer because he (or she) occupied the obverse side of an album that you bought for what was on the other one. That happened to me once or twice with the composer William Bergsma (1921-1994), I believe a Turnabout and a CRI LP (which I still have around here someplace). The music impressed me to a point that I sought out other recordings of his music. Time moved on and at his passing in 1994 I was not aware of much coming out of his. Yet he left an impression that made me jump at the chance to hear a newly issued recording of his music, The Voice of the Coelacanth (Centaur 3371). It is an anthology of chamber works for small ensembles and solo piano, spanning a time period between 1943 and 1983.

These are mature, modern works in a kind of neo-classical style somewhere between Stravinsky and Hindemith, that somewhere being Bergsma's own turf. Thematic memorability and drama are embedded in harmonically advanced terms.

We get "The Voice of the Coelacanth" for violin, horn and piano (1981), which has a dramatic turn that makes especially good use of the power and dynamics of the horn. "Changes for Seven" (1971) for woodwind quintet, percussion and piano has a rather dreamy yet declamatory sort of gestural quality and again makes the horn stand out from the ensemble at points.

The performances are very decent, sometimes very, very decent. In the end you are exposed to a good batch of first-rate Bergsma, who indeed still deserves to be heard and comes through with plenty of excellent music to contemplate.

Any student of 20th century American modernism would profit by getting to know this disk--and derive some genuine pleasure as well.

Email ThisBlogThis!Share to TwitterShare to FacebookShare to Pinterest
Labels: modern american chamber music of the mid- and later-20th century, william bergsma the voice of the coelacanth gapplegate classical-modern review