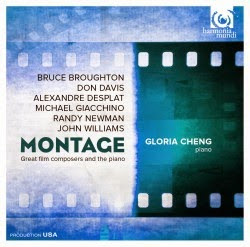 If you like me grew up with old movies as part of TV fare, you at one point realized that much of the old scores featured a warmed-over romanticism that did its job but was not necessarily compositionally self-sufficient. All that of course changed in time so that nowadays soundtracks can be that as well as quite functionally effective. Many stand up to musical scrutiny. The idea that a good or great composer may also write soundtracks is now quite understandable, though of course the older days had its share.

And as if to underscore that point pianist Gloria Cheng has looked at it all in reverse, that is, she selected from a few acclaimed soundtrack composers some works written expressly for solo piano. On Montage (Harmonia Mundi 907635) we have a chance to hear six acclaimed soundtrack composers bring all their "serious" composing skills to bear on six solo piano works/suites. They show us original and eclectic music that draws upon neo-romantic, neo-classical, neo-impressionist, song-form and modern tendencies to create recent works both absorbing and convincing, played with sensitivity and dash by Gloria Cheng. All of the works presented here enjoy their premiere recordings.

These are works Ms. Cheng either commissioned herself or were presented to her by the composer involved. They all have very much something to them; they are serious and contentful.

It is a pleasure to hear the program and you'll probably find yourself returning frequently to the music. It most certainly is a pleasant surprise!