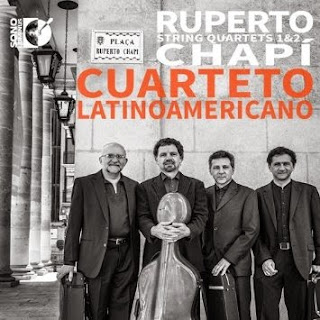 The traditional music of Spain has a special set of sounds all its own, perhaps because of the native genius of the people and their exposure to Moorish influences long ago. Early on Scarlatti and Boccherini were the most notable composers to incorporate Spanish folk strains into their classical styles and no doubt there were others, though I am less aware of them. Enrique Granados and Joaquin Turina were prominent composers of the early modern era who did much to fuse old folk Spanish elements into a contemporary style. Yet there were others involved too, some not well-known to us, others known to all.

Ruperto Chapi (1851-1909) is one not very familiar to a non-specialist. I had not previously encountered his music prior to the release of his String Quartets 1 & 2 (Sono Luminus 92185) as performed by Cuarteto Latinoamericano. I've been listening closely to it and I must say it is a revelation.

His quartets show more affinity to the brio Boccherini than to the romantic era within which music dwelt in that period. They are straightforwardly brilliant, compact and vividly conceived four-movement works that have a very Spanish inflection and engage with an elan which is quite unresistable. Thematically they breathe with spirit and elegance of form.

The Cuarteto Latinoamericano gives us sparkling renditions of the quartets with a zest that leaves nothing to be desired. These are near-ideal performances one imagines being topped with some difficulty.

Chapi was in his lifetime better known for his Zarzuela and lyric works. The turn to the quartets came rather late in his career. But no matter, since they are very much sufficient in themselves.

Brilliant! I look forward to more from the Cuarteto Latinoamericano and further explorations of Chapi as I find further examples out there. This one is a stunner.