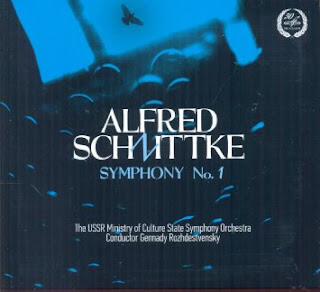 The premiere recording of Alfred Schnittke's Symphony No. 1 (Melodiya CD 10 02321) by the USSR Ministry of Culture State Symphony Orchestra under conductor Gennady Rozhdestvensky in 1987 was a signal event in evolving glastnost policy as well as a triumph in Russian late-modernism. The recent Melodiya CD reissue has just become available here and it is a remarkable album.

The Symphony is a rather titanic work, filled with dense modern clashes and collages of many different musical strains, from baroque to free jazz, from marches to the blues, all interspersed within a linear fire-breathing avant orchestral setting. In the original liners reproduced for the CD edition Schnittke called what he was doing "polystylistics" and noted his debt to pioneering composers like Ives and Mahler. No doubt the singular Schittke First was and is a landmark venture into a postmodern landscape, albeit a kind of continuation and extension of collage style. Schnittke was most certainly at this phase of his career one of the most important exponents of the new cacophony, the "impure" form of modernism of the last years of the 20th century. This is a extremely important and also extremely engaging work that gives us a window onto the era as seen by a brilliant musical mind.

I missed the original LP issue at the time. It was not widely distributed in the States but I soon heard of the composer and ultimately began exploring his music in some depth based on what became available to me.

This recording marked a real turning point for the composer. He envisioned it as a kind of chronology of the 20th century in musical terms. There are aleatoric elements and huge expanses of orchestral sound that require a very large symphony orchestra, which subsequently produces some of the most remarkable sonic spectacular fireworks you are likely to hear from such an outfit.

A good deal of preparation no doubt was required to get it all right. The performance has nothing of the slapdash to it, though there are extraordinarily chaotic qualities to parts of the work. Rozhdestvensky manages to convey the excitement and turbulence of the music while parsing out each sound event section with some care and attention to the overarching whole.

There is at least one later recording available according to Amazon. I have not heard any but this one. The historic and artistic importance of the Melodiya recording makes it essential, surely. It is indispensable Schnittke and a breakthrough postmodern work that should be studied and appreciated by anyone committed to understanding late modernity in the orchestral sphere. It is also a breathtaking work in definitive performance!

If you want to know how we got to where we are today, this belongs in your library.