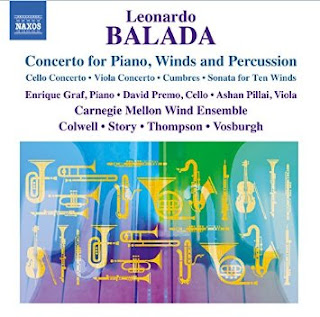 Spain's most distinguished high-modernist? That likely is Leonardo Balada (b. 1933). Naxos has been releasing a number of fine volumes devoted to his music (look his name up on the search box above for more reviews), the latest of which is Concerto for Piano, Winds and Percussion (Naxos 8.573064). It pairs the Carnegie Mellon Wind Ensemble under various conductors with Enrique Graf, piano, David Premo, cello, and Ashan Pillai, viola, for the concerted numbers.

Balada's output is divided between a first, neo-classical period, characterized by the "Concerto for Cello and Nine Players" (1962, rev. 1967) included here, and his later high-modernist phase, which is represented nicely by four works on this volume, composed between 1971 and 2009-10.

He came to the US years ago, where he graduated from Columbia after studying with Persichetti and Copland. He has been a professor of composition at the Carnegie Mellon University in Pittsburgh since 1970.

The Carnegie Mellon Wind Ensemble is a first-rate ensemble and seems ideally suited to perform the various compositions on this album.

We get to hear an excellent assortment of works by Balada: "Combres--A Short Symphony for Band" (1971), the "Concerto for Piano, Winds and Percussion" (1973), the aforementioned "Concerto for Cello and Nine Players" (1963), a first recording of his "Viola Concerto" (2009-10) and his "Sonata for Ten Winds" (1979). All are central Balada, showing master craftsmanship and inspiration, a modernist and neo-classic tang, and a contrapuntal complexity that does not so much remind of later Stravinsky as much as parallels him as an equally original voice in the modern lineage.

The music can be ascerbic, it can be stirring; it is consistently dramatic and expressive; it is always substantial.

It forms an excellent introduction to Balada for those not familiar, and also gives those that do a wealth of excellent music to savor. The performances are exemplary as well.