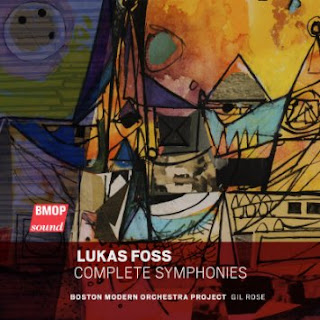 By the time I became a bonafide, dedicated follower of new classical and avant garde music, that is in the early '70s, Lukas Foss (1922-2009) was at a peak in public recognition as one of the leading modern compositional voices in the USA. I am thankful for that because it gave me the chance to hear much of his work, as recordings of it were fairly plentiful and readily available. His notoriety faded somewhat in later years as did the popular attention to new music and subsequently too my undivided attention to it for a decade or so.

Nonetheless I have found many of his works essential and my appreciation for his brilliance has gone undiminished. Looking back, I especially admire the "Time Cycle," which incorporated chamber improvisation, the "Baroque Variations" and its use of baroque musical sources to create an old-new amalgam, and his "GEOD" which nicely anticipated and offered a very personal solution to cyclical structures for a style that became in time known as minimalism. A proto post-modern poly-stylism characterized all of these works, for music that managed to be advanced yet highly appealing to most adventuresome ears. They and the majority of recorded works available then showed a composer acutely tuned to stylistic possibilities otherwise then mostly latent, and a vivid sense of drama and significant form, a personal originality and uniformly high level of craftsmanship and artistic inspiration.

Like anything else in music, the newness element fades and we are left with works that either still manage to speak to us, or, sometimes otherwise. To me Foss still sounds fresh and relevant, ever more so.

For whatever reason I never encountered his four symphonies. Some of course were not yet written, and there may have been some obscure recordings available of the first several at the time but I never came across them when I was most actively combing through the classical record store stacks.

Fortunately and most happily the Boston Modern Orchestra Project, a fine organization devoted to resurrecting now unjustly neglected orchestral gems in the modern zone, has under Music Director Gil Rose taken care to provide us with excellent performances of all four Foss symphonies in the two-CD set Complete Symphonies (BMOP Sound 1043).

The symphonies cover most of Foss's career, from 1944 through 1995, and were a platform where Lukas could synthesize, sum up and put into definitive form what stylistic universes he was either then traversing or was subjecting to retrospective attention. So we get the mysterious and atmospheric minimalism of "GEOD" refined, re-presented and integrated into a lush orchestral tapestry on his Symphony No. 4, "Window to the Past", or his own magnetically singular neo-classicist way in his 1944 Symphony No. 1.

Each symphony is a milestone, as it turns out, in the overall body of Foss works. I am delighted to get to hear them in their full and detailed glory so wonderously realized by the Boston Modern Orchestra Project under Rose. I am sure this volume will turn more than a few heads while also reminding us dramatically how important a composer Lukas Foss was, how central he sounds today.

It is with the heartiest recommendation that I present this set to you now. Anyone with an interest in 20th century modernism will gain I think great pleasure and insight by listening to this set. It is surely a candidate in my mind for the record of the year.