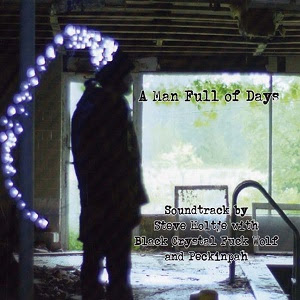 What we have at hand today is the soundtrack of the film A Man Full of Days (MechaBenzaiten MB 15). It features primarily the music of Steve Holtje. In full disclosure I count Steve as a friend and associate, mostly though our ongoing dialog on the internet and in the course of his tenure managing ESP records. But that is a separate matter from his music, which I would not be posting on did I not find it very interesting and engaging.

The 15 compositions of Holtje are supplemented by two from Black Crystal F_ck Wolf, one by Bruce McKenzie (Peckinpah) and a brief 1930 orchestral work by Levko Revutsky and Vyacheslav Ovchinnikow. The additional pieces do not disrupt the mood of Holtje's music, but serve to enhance it.

Steve has a definite penchant for the atmospherically ambient. There are a number of electroacoustic movements that set a powerfully inner-directed mood and have nicely realized sound color-texture traits. There are solo piano works that add onto Satie's "Gymnopedies" in good ways; there are also pieces that utilize some aetherial organ sounds and one that includes a women's chorus.

Through it all we have some extraordinarily interesting modern/post-modern mood-tone poetry. Holtje proves to be an especially effective sound sculptor in these movement-works. I found myself increasingly gravitating towards the music as I listened more and more.

On the basis of this soundtrack album I do find Steve Holtje to be a composer to watch. This is a very nice introduction to his music and I certainly hope there will be more for us to appreciate in the years to come. He has an adventurous yet also a very engaging way.