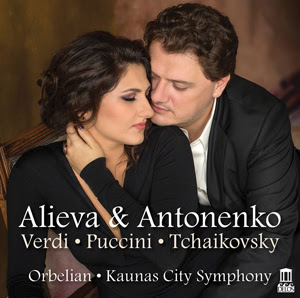 Through the recorded medium we have valuable documentation of the greatest opera singers of the 20th and now 21st centuries. In my listening habits I initially concentrated on the operas themselves. In the '70s I began exploring the great vocalists. Callas, Gigli, Ferrier, Godunov are favorites, not surprisingly. And then there is a new generation of vocalists, two of whom combine forces on a recent album. I speak of Dinara Alieva and Aleksandrs Antonenko, Azerbaijani soprano and Latvian tenor, respectively, in a program of arias and duets by Verdi-Puccini-Tchaikovsky (Delos 3477).

The singers are accompanied nicely by the Kaunas City Symphony Orchestra and Choir, conducted by Constantine Orbelian. The repertoire should be familiar to all, with excerpts from Verdi's Aida and Il Trovatore, Puccini's Tosca and Tchaikovsky's Queen of Spades.

Both Alieva and Antonenko are formidable exponents, dramatic, ravishingly dynamic, vocally extraordinary, some of the best of our day.

I especially like their Tchaikovsky, perhaps because I have not heard as many versions of the arias from Queen of Spades, but also because they seem particularly exceptional in bringing out the color and thrust of the music here.

In any case I am impressed with both. These are world-class artists of the first rank. The disk tells us that clearly and unequivocally, impressively and very enjoyably.

If you seek some fresh talent in your operatic journeys, look no further. Very recommened.