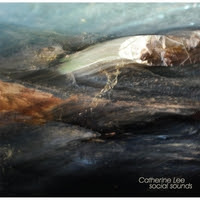 If the tides change constantly, fashions nearly as much, and political-historical events ebb and flow continually, there are some things with which we perforce ground our lives within us. One of those for many is music and the happy fact is that there is no shortage of it. New music and old music revisited abound, in a continual flow. It keeps me going through all seasons, a bitter cold dawn and its wonderfully colorful sunrise this morning being no exception.

A superior instrumentalist greets the sunrise for me, one Catherine Lee, an oboist of stature in an evocative program of new music for oboe solo, Social Sounds (Teal Creek Music 2035). There are five works by contemporary modern composers, one for oboe d'amore and tape, one for English horn, the rest for oboe proper.

Dr. Lee has a ravishing, declamatory tone and absolute control over her instrument, whether the work calls for extended techniques or less so. The modern extensions of tone production integrate themselves into conventional soundings on these works and Catherine negotiates them with ease, incorporating them into the fanfare-like extroversions and the more introspective passages with absolute musicality. Harmonics, alternate fingerings that lead to subtle shifts in timbre and microtonal differences, pitch bends, all are made an integral part of each compositional whole.

The works are given dramatic, rhapsodically lyrical realizations without fail. We are treated to "Still" (2006) by Dorothy Chang, "Rafales" (2007) by Jerome Blais, "Plainsong" (2004) for English Horn by Tawnie Olson, "Social sounds from whales at night" (2007) by Emily Doolittle (whose music we have encountered here before--type her name in the search box above) for oboe d'amore and tape (providing us with some extraordinary whale soundings--sequenced and somewhat transformed if I am not mistaken--to accompany fittingly the instrumental part), and "A Tiny Dance" (2008) by Catherine Lee.

The scores allow varying degrees of improvisation on the part of the performer. Catherine's experience in classical-modern and free-improvisatory settings serves her well. She is a founding member of the Blue Box Ensemble and forms half of the Catherine Lee + Matt Hannafin Duo. Her doctoral dissertation centered around 18th century virtuoso performers and their interactions with audiences and heightened her interest in the role of improvisation. McGill University (Montreal) awarded her a Doctorate for her work there.

The compositions have thematic underpinnings. Dorothy Chang's work was inspired by "Red-Black," a painting by Lawrence Calcagno that hangs in the Empire State Plaza, Albany. Jerome Blais was inspired by the many variations of wind he experienced when he moved to Halifax, Nova Scotia. Tawnie Olson's piece treats structural aspects of plainchant types performed in the Night Office. Emily Doolittle crafts an evocative soundscape around night sounds whales communicate with. It was originally for soprano and tape but Ms. Doolittle adapted the vocal part for oboe d'amore at Catherine's request. It bears the transition quite well! Dr. Lee wrote "A Tiny Dance" for two dancers who designed their dance patterns around performing in a restricted space with a number of natural and man-made obstacles. It was performed as part of the dance piece "Wet?" at Ten Tiny Dances Waterfront Project in Portland, Oregon.

The beautiful artistry of Catherine Lee ultimately breathes vital life into the music. It is music to beguile and uplift the spirits. It is modern yet lyrical. It is a stunning feather in Ms. Lee's very musical hat. Recommended strongly for double-reed enthusiasts and modernists of all stripes.