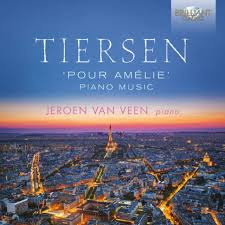 Yann Tiersen (b 1970) writes pleasing music for solo piano. I base that on Jeroen Van Veen's 2-CD set Pour Amelie (Brilliant Classics 95129). By pleasing I mean it in the general sense. The set presents 45 mostly very short works. They are minimalist and lyrically liquidian, with a feel that reflects an affinity with Philip Glass, but perhaps also Satie and Chopin in their flowing modes. The liners refer to this as "French nostalgic music," and at times you do hear echoes of cafe pop from years ago.

Tiersen came to prominence with his soundtrack music for Jean-Pierre Jeunet's film "Amelie" and a bit of that is included in this program. Some of it SOUNDS like movie soundtrack fare, indeed. Short, new romantic in its emotionality, no doubt reinforcing the mood of the film. I have decidedly mixed feelings about it all. And that has nothing to do with Van Veen's performances, which seem to me exactly what is called for.

Some have a quasi-banality to them that borders on new age music, but then there are pieces that add a twist of melodic-harmonic inventiveness and have something distinctively good about them. But the rest are perhaps understandably "popular" in the sense that the average listener gets a soothing, no worries ambiance that can either be minded or more or less ignored, like what "easy listening" music was for my parents' generation, a comfy chair kind of unity of gentle affect.

When the music works it can be that and well wrought. Complex modulations or heightened mood contrasts are not the order of the day, though. Once you get used to the way the music is to proceed, you settle in and, to me, get maybe one in three pieces or perhaps two that have something captivating. The rest is patently inoffensive but perhaps also bland.

And so the music goes. It will appeal to folks with jangled nerves who want something soothing. The rest of us will find things to like, surely, but things also to feel indifference towards. I could be wrong. Minimalism as it takes this sort of approach is perhaps nearing the end of its days as a serious music. The best of it develops or has rhythmic vitality and a mesmerizing way about it. Tiersen has gone the route that Glass sometimes falls into--that is, sometimes settles for simple ostinatos with a easily understood attractiveness. Tiersen at his least interesting here has that tendency. But then there will be something more substantial that breaks out and gets your attention.

So whether you should have this set depends on how much minimalism you require. There are definite moments here but otherwise I would not call this essential listening.

Posted by Grego Applegate Edwards at 5:02 AM